From certFHE Community KB
Jump to navigation Jump to search

Image processing operations require complex computations. The emerging cloud technologies provide businesses and individuals with the possibility to outsource these computations on a remote platform with large resources and high availability. This approach substantially reduces the costs, but raises privacy concerns. To address these concerns, the data (i.e. the images) owned by the user could be encrypted, sent to the cloud and processed there by taking advantage from the properties of a homomorphic encryption scheme. The result of the computation performed on encrypted data is sent back to the user to be decrypted.

In the paper [1] the authors study the possibility of performing some morphological operations on encrypted digital images. The chosen operations, when represented as plaintext operations in the field

are modelled by very sparse polynomials of large degree. This makes them very suitable to be performed homomorphically using the certSGN scheme.

The authors of the paper have implemented these operations using the certSGN, the BGV and the BFV schemes. The results are discussed and compared.

So-called morphology operators are used to extract properties of the image, useful for its descriptions (such as the contour, skeletons or convex hulls). One has to input two parameters: a binary image and a structural element which describes some geometrical shape and is much smaller than the processed image.

The pixels in a binary image are partitioned in two disjoint sets: objects and background. Morphological operations between a chosen structural element and the image can be expressed as classical set-theoretic operations (such as intersections and unions).

A black and white image can be represented as a binary matrix, where value

represents the background pixels and value

represents pixels that are associated to objects.

A structural (or structuring) element consists of a description of a certain shape, typically much smaller than the processed image. The most common elements have a special nume: box (rectangle of a given size), disk or ring.

Elements of a structuring element

of the element, a pixel which is usually crossed in diagram representations.

Generally, the origin of the structuring element is chosen to be the pixel located at the center.

An operation commonly used to compute the result of a certain morphological primitive is the translation. If

is a fixed vector, then the translation of

represents the vector addition in

as finite subsets of

is the set of pixels

for which the translated structural element

is contained in the image

Intuitively, after an erosion operation is performed, the set

retains only the positions in the image for which all pixels of the translated structural element belong to the object set.

Below we see an example of erosion operation.

can be represented by binary matrices

as an object in the image and

as background. To compute the eroded image

, represented by a matrix

one must check whether for all elements

holds for all pixels

If it holds, then the pixel

is kept in the image

and the corresponding element from the matrix

is set to be equal

One can see that for each

in the eroded matrix

can be computed as

This computation can be done in an encrypted manner if the encryption scheme is homomorphic with respect to multiplication, like the certSGN scheme.

That is, the dilation retains all the pixels

for which the translated structured element

intersects non-trivially with the image. Below we see the effects of a dilation with a structured element

Using the notations in the previous subsection, the entries of a binary matrix associated to a dilated image can be computed from the following equality.

Using the primitives described above one can perform edge dection, as the

difference between the initial image and its eroded version. This is described in the image below. 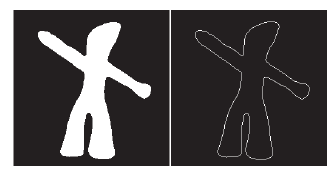 Opening and closing are other morphological operations.

is performed in the following way:

is the erosion of

with respect to the origin (its center).

is the dilation of

The erosion carried out first eliminates the noise and shrinks the object shape, while the next dilation expands the object back, but without the eliminated noise.

A similar operation, the closing of

is the dilation of

is the symmetric of

is the erosion of

The authors used an implementation of the certSGN encryption scheme to compute morphological primitives over an encrypted image, and also compared their results with other LWE based schemes such as BGV (HElib) and BFV (Microsoft SEAL).

The experiments show that for certian structural elements the certSGN implementation presents optimizations of 300x up to 10000x in execution times of morphological primitives and in 2.87x to 55x in memory optimization over the LWE schemes. The details of the experiments can be found in the paper.